IAM: What happens when you assume a role?

One of the many items on the list of AWS security best practices is to use roles to grant limited access to certain resources for a limited period of time. When you start out, the process of using roles often isn’t straightforward and you end up in a situation where you’re told to “just execute these commands and it will work” (reminds me of git). In this article we’re going to take a look behind the curtain and we’ll learn what’s going on when you assume a role.

Before we dive into the process, let’s get some terminology out of the way. You’ll most likely be familiar with IAM Users. These are an example of both identities and principals in AWS. An identity is used to identify and group entities within Identity and Access Management. Principals on the other hand can take action in an AWS account and make calls to APIs. These are closely related, which is why these terms are often used interchangeably. There is however a difference: 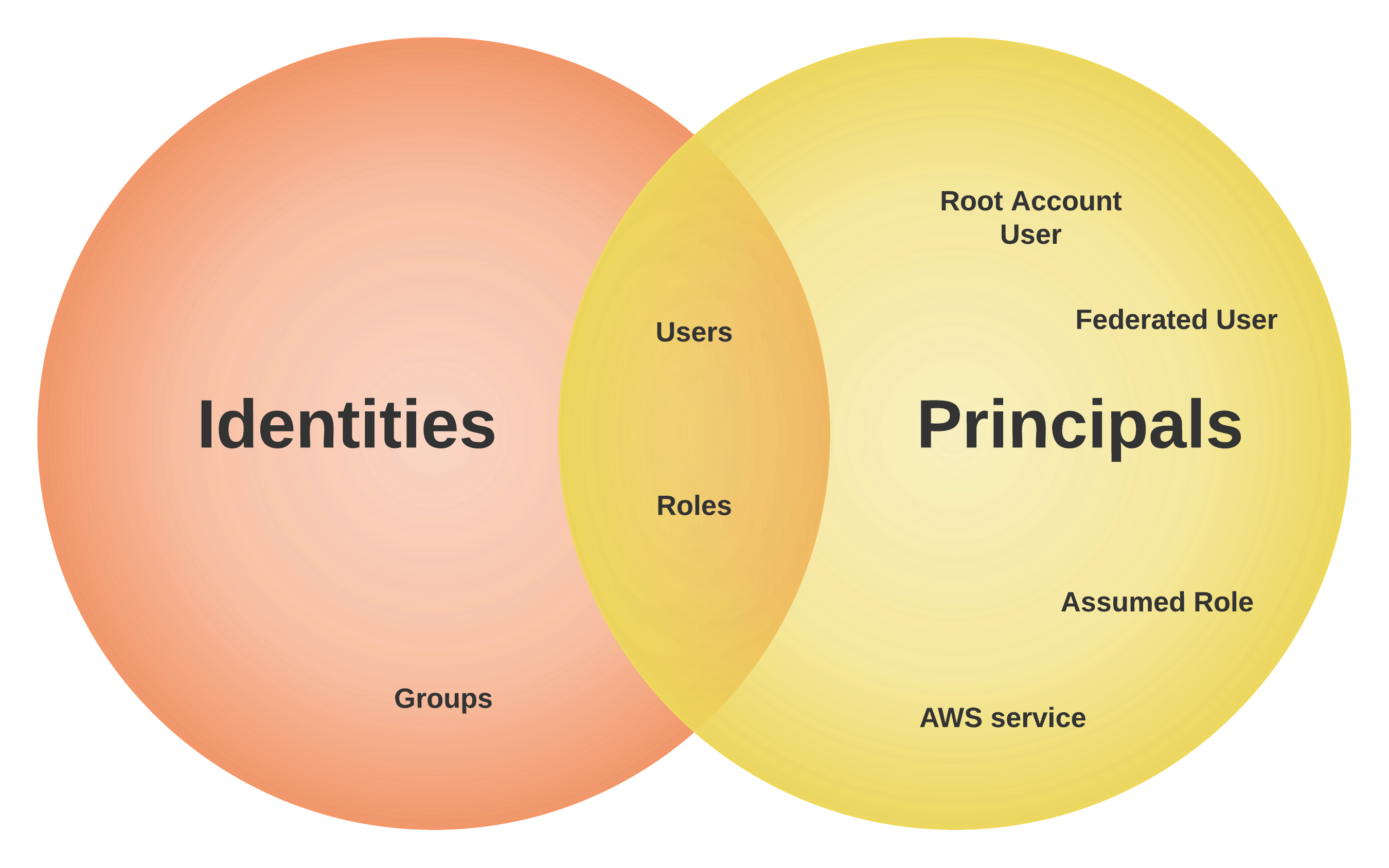 An IAM group is not a principal and as such can’t take action in an AWS account. We can see in this diagram that only users and roles are both identities and principals. These are what we’re going to focus on. The other principals work the same way. Principals take care of the authentication in an API call, which is the first step that needs to happen. The entity must prove that they are who they claim to be.

The next step is authorization, which is covered by policies in IAM. A policy allows or denies a set of actions to a principal on certain resources. These policies come in two main varieties: identity-based and resource-based policies.

Identity-based policies can be attached to all identities and resource based policies belong to resources. They’re very similar in what they do, but there are a few key differences:

Now that we’ve covered the mechanisms for authentication (principals) and authorization (policies), let’s take a look at roles. A role is both a principal and identity in AWS and has the primary purpose of granting temporary permissions to perform API-calls in an account. In order to use a role, it has to be assumed. 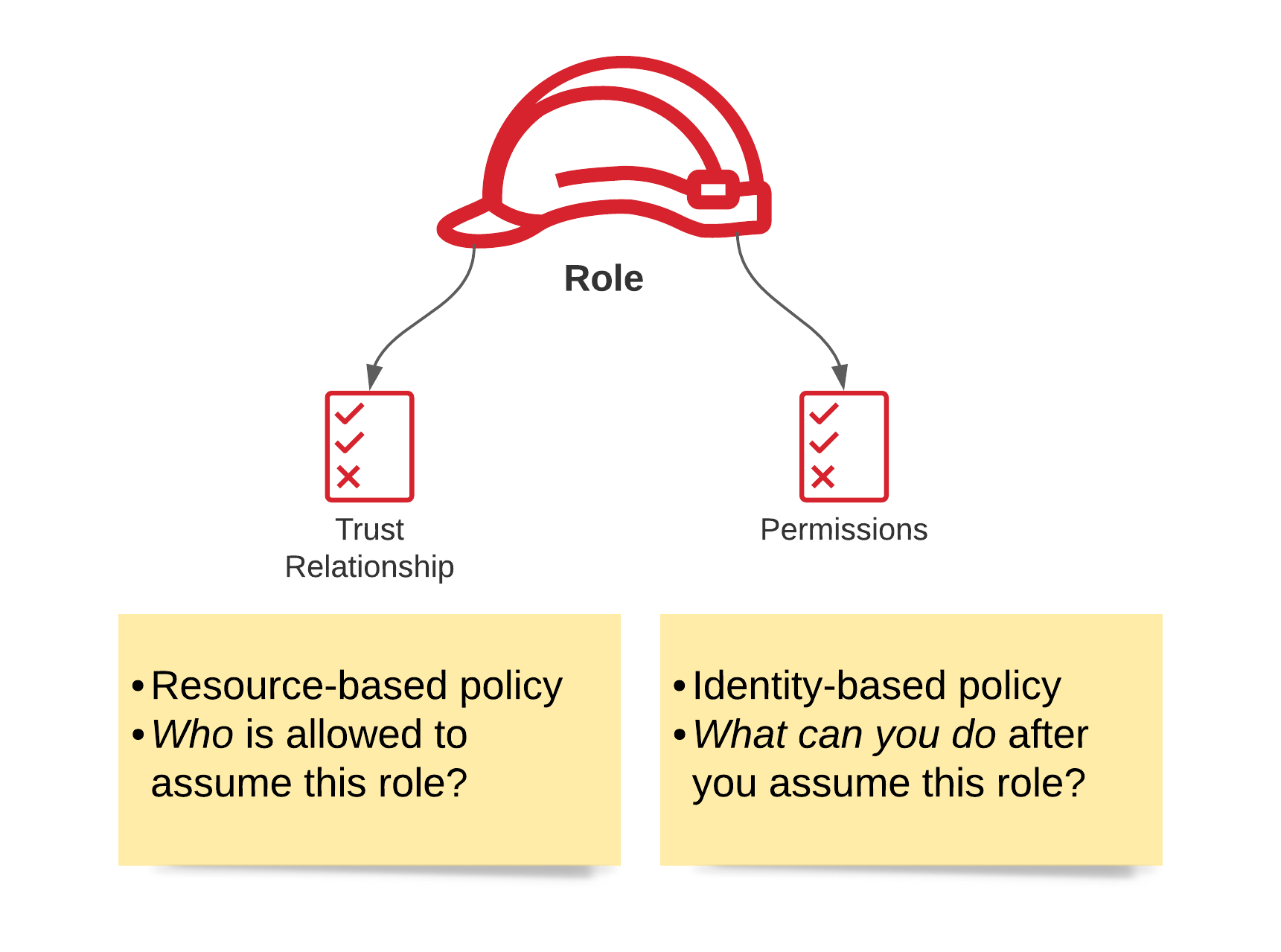 To assume a role, we use the Security Token Service (STS) that gives us temporary credentials to use the role. Why would we need separate credentials? When you assume a role, you get credentials, which you can use to make API-calls with. These credentials let you act as the role until they expire. They’re separate from your original credentials, so you can easily use both at the same time for different API calls. Temporary Credentials also look different from the long-term credentials.

The API call we need to make in order to assume the role is the sts:AssumeRole action. Here we need to specify the ARN of the role we want to assume as well as a session name. The session name will be visible in CloudTrail and is part of what makes it transparent who assumed a role. Optionally we can also specify how long the credentials should be valid. The upper limit in IAM is 72 hours, but you can specify a lower boundary for each role.

In order for this to work, the principal that assumes the role needs the sts:AssumeRole permission for said role in its identity policy and the principal needs to be listed in the trust relationship of the role. If either of them is missing the call fails. When the permissions are set up correctly, the STS response contains a credentials object with four pieces of information:

You can then use the first three pieces of information to instantiate your API client and make API calls with the permission of the role. Now we know all the pieces of the puzzle, let’s visualize the full picture:

To me the process seemed a bit confusing when I first encountered it, but it makes a lot of sense once you understand what’s going on. Now we’re going to take a look at some common issues when assuming roles or using temporary credentials.

An error occurred (AccessDenied) when calling the AssumeRole operation: User: arn:aws:... is not authorized to perform: sts:AssumeRole on resource: arn:aws:iam:<account>::role/<rolename>

This is probably the most common error you’ll encounter and there are a few things to check:

An error occurred (ExpiredToken) when calling the ListBuckets operation: The provided token has expired.

When using a role, you sometimes encounter Access Denied errors that shouldn’t be there. There are two main sources of errors here:

In this post we took a look at what goes on behind the scenes when you assume a role in AWS. We looked at identities, principals and the different kind of policies that can be used. After covering the workflow to assume a role we also looked at some common errors and how to address them.

Hopefully this has been helpful to you and I look forward to your questions, concerns or any feedback you may have. If you want to get in touch, take a look at my bio - there are a few ways to do that.

We can use permissions boundaries to give developers and teams more freedom to create their own resources. For forcing them to provide specific tags during resource creation, we need a deeper understanding of how this can be achieved. We talk about the example of creating a security group. - by André Reinecke

There is a conflict between developer freedom and the requirements of security teams. In this post we’ll look at one approach to address this tension: permission boundaries. They’re an often overlooked part of IAM, but provide a valuable addition to our security toolkit. - by Maurice Borgmeier

AWS launched re:Post as a successor to the AWS forums and it looks suspiciously similar to stackoverflow. In this post I take a first look at the platform and try to find out if it’s good enough to drive traffic away from stackoverflow. - by Maurice Borgmeier